As a result of COVID-19, face-to-face meetings have been suspended until restrictions are eased. However, we are starting a series of remote meetings by Zoom. Details are being circulated to members and see below.

Recordings of talks are available to view here. 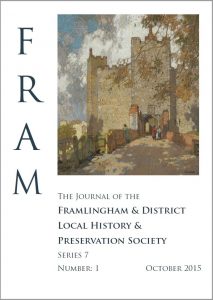 In 1953, Mr Harold Lanman, a long established dealer of antiques in Framlingham, held an exhibition of old photographs and artefacts in the Assembly Rooms. As a result of that exhibition, the first constitution was drawn up in 1956, and the Society came into being. Apart from local history aspects, there was always the intention of assessing the effect of proposed developments in the town.

The aims of the Society were to not only encourage and foster interest in the social history of the town and the surrounding district, but also to provide accommodation for all objects given, presented, bequeathed or loaned to the Society.

Prominent figures in those early days were the Reverend Martin Bulstrode, Commander Sitwell, Gerald Leedam, John Self, Percy Stannard, Henry Turner, and of course Harold Lanman. The museum opened in premises on the Market Hill in 1957, before later moving to Double Street. A separate Trust was set up for the museum in 1978, followed by a move to the old Court House building in Bridge Street. It was also renamed The Lanman Museum, but sadly Harold died a few weeks before the official opening. The museum continues as a separate trust, with a final move to the castle, where the wide range of exhibits are viewed by the large number of people who visit each year.

The website for the Lanman Museum can be found here.

The Society has successfully held a winter programme of evening lectures in The United Free Church Hall for many years, and these well attended events continue. Visits are also arranged to places of interest in the summer months. It has also made donations to various projects, including a plaque to commemorate Sir Henry Thompson, the surgeon to Queen Victoria, who was born in Framlingham. In 2009, the Historical Archive project was adopted by the Society.

The production of a Newsletter commenced in 1968, and the current Fram Journal is sent to members in the spring and autumn annually. This covers a wide range of local history matters, with the Millennium issue running to 40 pages.

The annual membership fee of the Society is £12, or £18 where two people are at the same address. Enquiries should be addressed to: