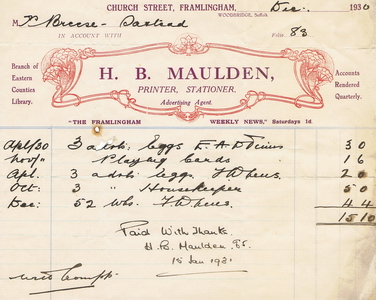 The idea for creating an historical archive for Framlingham was conceived in 2008, and is now incorporated in The Framlingham and District Local History and Preservation Society. The aim of the Archive is to initially develop the photo website Fram on Film, and with time, to include further material for people who are interested in historical aspects of the town – an example would be the James Breese Collection. This collection, which would not usually be accessible, contains over 4,200 bills and receipts for businesses and activities in the town, which span the period from 1882 to 1957. Typical examples will portray the costs and manner of trading in years gone by.

The archive material and content has mainly been developed by Amanda Cornwell, John Bridges and Tony Moore, while the website was originally constructed by Simon Appleby and designed by Barnie Mills, and has been rehosted and redesigned by Simon Garrett.

The Historical Archive is for educational and research purposes, and the material, which is of low resolution, is not to be used for any commercial application. 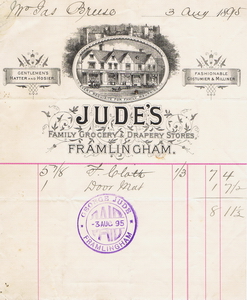 Several of the photos are copies of the original, or are from postcards, of which many were produced, which can make it difficult to attribute specific ownership. For that reason, we simply list below those people who have generously lent material to be used in the photo archive. We are grateful to the following: